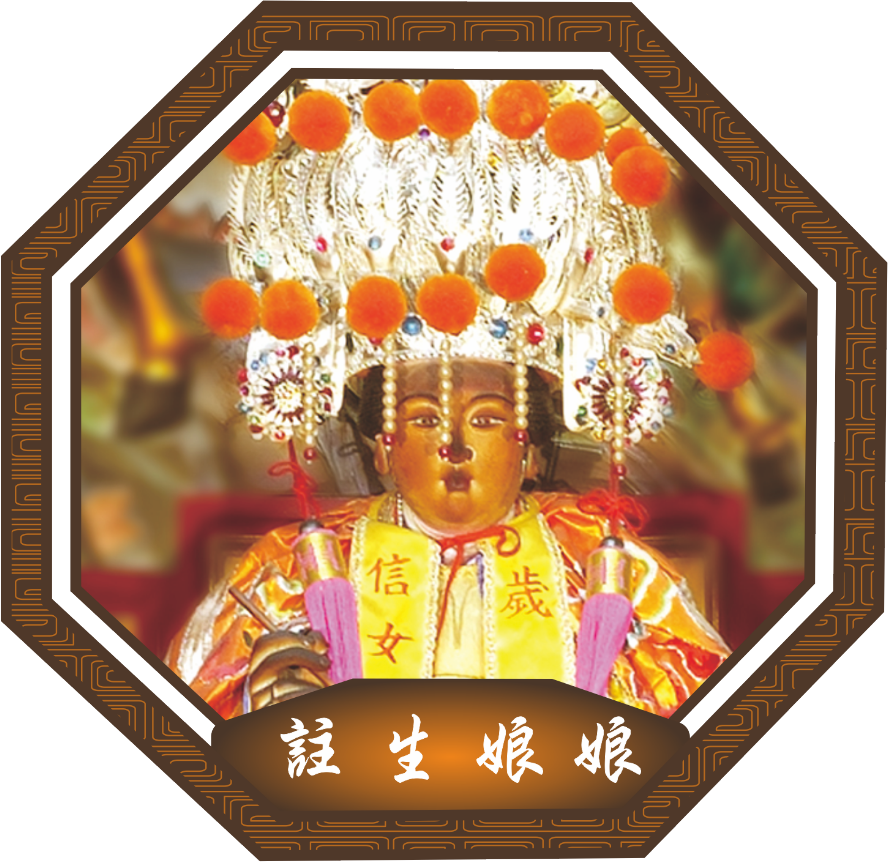 There are largely two versions in folk culture. One version says that Lady Zhusheng is actually three sisters Yunxiao, Qiongxiao and Bixiao from the Island of Three Fairies as recorded in the Ascension of the Gods. The three fairy sisters were disciples of Holy Mother Guiling, and managed to create the divine artifact “Measure of Chaos” using a birthing basin. When their blood brother Zhao Gongming (Marshal of Xuantan) perished by the hands of Jiang Ziya, the three sisters vowed vengeance and swore their allegiance to the Grand Tutor Wen. They would array the Yellow River Formation and cause massive casualties to the Zhou army. All three sisters will lose their lives when Jiang Ziya managed to obtain the help from the Great Primeval Celestial Lord and laid waste to their Formation. When Jiang Ziya returned to his home to begin the Rites of Ascension, the three fairy sisters were entrusted with the Measure of Chaos. The rotation of the artifact was the reason behind birth. The common folk thus adopted this story and began worshipping the Three Fairy Sisters as “Lady Zhusheng”. Another saying describes how Lady Zhusheng was Chen Jinggu of Lingshui village in Gutian County of Fujian, and was born during the Dali Era of the Tang Dynasty. She was reputedly to be the reincarnation of Bodhisattiva’s blood-drop and married Liu Qi when she came of age. The village was struck with a devastating drought when she was several months pregnant, and with the pleas of the villagers she prayed for rain, losing her child and life in the process at the age of 24. Before she died, she swore to save women from labor complications. After her deification, the Lady often performed miracles to ease child birth, and for these deeds the common folk honored Her as Lady Zhusheng. She has 12 Ancestral Mothers under her wing, each carrying a mother in their arms. 6 of them were good, and 6 of them evil, indicating that children’s inclination depends ultimately on acts and charity. It is said that “Of the Three Crimes against filial piety, none is greater than being childless”. The traditional Chinese mindset of rearing children and the sincere wish of leaving descendants led to unending and dedicated worship of Lady Zhusheng, out of which sprang unique folk customs of “Moving Flowers Changing Measures” and “Planting Flowers and Changing Measures”. The former custom prayed that Lady Zhusheng would alter the gender of the unborn baby to satisfy those who wish for a son or daughter. The latter custom is performed by childless wives who prayed for a miracle. The belief in Lady Zhusheng also created many subsidiary deities including the Flower Lord, the Flower Mother and a Prime Deity in Charge of the Flowers (infants) who are all tasked with the safeguarding of children’s health in their infancy. The 20th day of the 3rd month of the traditional calendar is the birth date of Lady Zhusheng. Married women would pray for a child on this day, while some others will bring their children to offer a flowered hairpin or children’s shoes to pray for their safety. Those who are fortunate enough to receive a reply from Lady Zhusheng are allowed to take their offerings home, but must offer a double offering in the future as a sign of gratitude. Lady Zhusheng is seated on one of the Seven Holy Pavilions after carrying out Divinatory Rites.