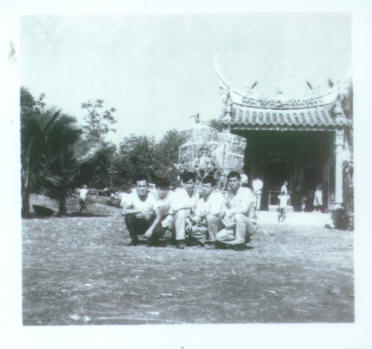 During the reign of Emperors Yongle and Xuande of the Ming Dynasty, the Sanbao Eunuch Zheng He led a fleet to the western seas to proclaim the might of China. The fleet encountered a typhoon on a return trip, and part of the fleet was forced to land at Santiaolun region, where “Taijian Fu” (Eunuch’s Hall) was built (about 1 km away from modern Zhenhai Park). The village manor was already worshipping the Honorable Prince Founder of the Min. But given that the head of the manor was related to the Imperial office holders, they often had disagreements with the Lunzaiding and Shanzailiao settlements. The name “Taijian Fu” was therefore used to differentiate the residents of the manor with those from Lunzaiding and Shanzailiao. In the reign of Emperor Kangxi of the Qing dynasty, a Nan’ao ship was also hit by a typhoon and limped to Santiaolun. Seeing that the boat carried several holy idols, the people of Lunzaiding welcomed Lord Su while those in Shanzailiao housed Lord Wang as their Chief Deity. Additionally, the Deities Lord Wen, Lord Zhu, Lord Bao, Lord Lu and Lord Wu were seated and worshipped in private residences. Each of the three settlements had their own beliefs and witnessed many miracles.

Around the year 1894, a great Tsunami struck Santiaolun, submerging the three settlements of Lunzaiding within days. Surviving villagers gathered as a single group at peaks of Lunzaiding and constructed a makeshift altar called “Gonghe Tang” (Unity Hall) where they housed the Deities. Coastal erosion was worsening during the Japanese Occupation era. Having failed to reclaim land from the sea, people were forced to migrate inland to Caiyuanzai. Hoping to gain respite from the Heavens, they asked the Deities to “subjugate the cceans” and named their temple “Jhen Hai Kung” (Palace to Subjugate the Seas) which remained to this day. The oceans have been calm ever since as a testament to divine intervention. 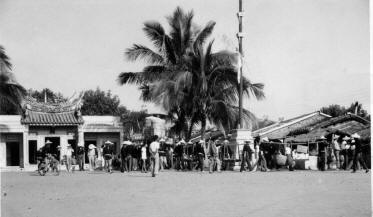 In 1956, the wooden Temple was in a state of dilapidation. The local elites called out for reconstruction and formed a Construction Committee, electing Mr Cheng Hong as Committee Chairman. The members include: Chuan-hu Hong, Ching-li Hong, Wen-kuei Hong, Yun-feng Hong, Shui-che Yang, De-jen Chiou, Pai Hong, Sheng-lai Chen, Chia-he Hong, Tian-wan Cheng, Yuan-chi Hsieh, Shui-chi Hong, He-de Guo, Hsu-mng Hong. General affairs manager was Hsing-fu Hong and the accountant Ching-dao Kang. With the help of donations and support from the local adherents, construction was begun in November 2nd of the same year, and completion was announced on 3rd Month and 26th Day of the Traditional Calendar in 1959. 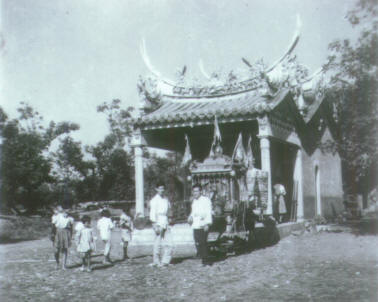 In March 2003, an incident spurred the election for the 5th Management Council. As it is written on the Holy Verdict: A Ceremonial Plea for Peace and Protection for Five Days must be held on the 18th Day of the 8th Month in the Year of Guiwei (2003). The Management Committee will work actively to raise the necessary funds for the completion of the Temple and clear the peak of Lunzaiding to conduct the First Centennial Rites.

In December 2007, a Five Day Post-Harvest Ceremony for Peace and Protection from Water and Flame was held under the direction of Lord Su, the Heavenly Viceroy of Seven Provinces. The Temple prayed on behalf of the people for good deeds, fine weather, national prosperity and peace, protection from disasters, celebrations year round and longevity for all adherents.

Lunzaiding is composed of a series of sand dunes, and is given such a name since it is located at Shazhou. Lunzaiding of Donggang is a region in modern day Jhen Hai Park. The venue was once ceremonial grounds honoring Lord Su. Today, it is one of the 6 Peaks of Donggang.

Shanzailiao was an early settlement in the same vicinity with Lunzaiding and often had disagreements with the settlers of Lunzaiding. After the tsunami disaster, the survivors were forced to move inland and join as one with those from Lunzaiding. The people of Shanzailiao worshipped to Lord Huang. This place no longer exists in modern times.

Taijian Fu (Eunuch’s Hall) was an early settlement in the same region with Lunzaiding, and the closest to the shore. It was given such a name as it was where the famous Sanbao Eunuch Zheng He landed and performed rites to appease the Heavens. In the early days, as a result of typhoon and coastal erosion, the houses were built light and transportable by the residents, allowing them to pack up and move inland when a storm approaches. The residents eventually moved inland due to the tsunami disaster and joined forces with Lunzaiding. Taijian Fu no longer exists today.