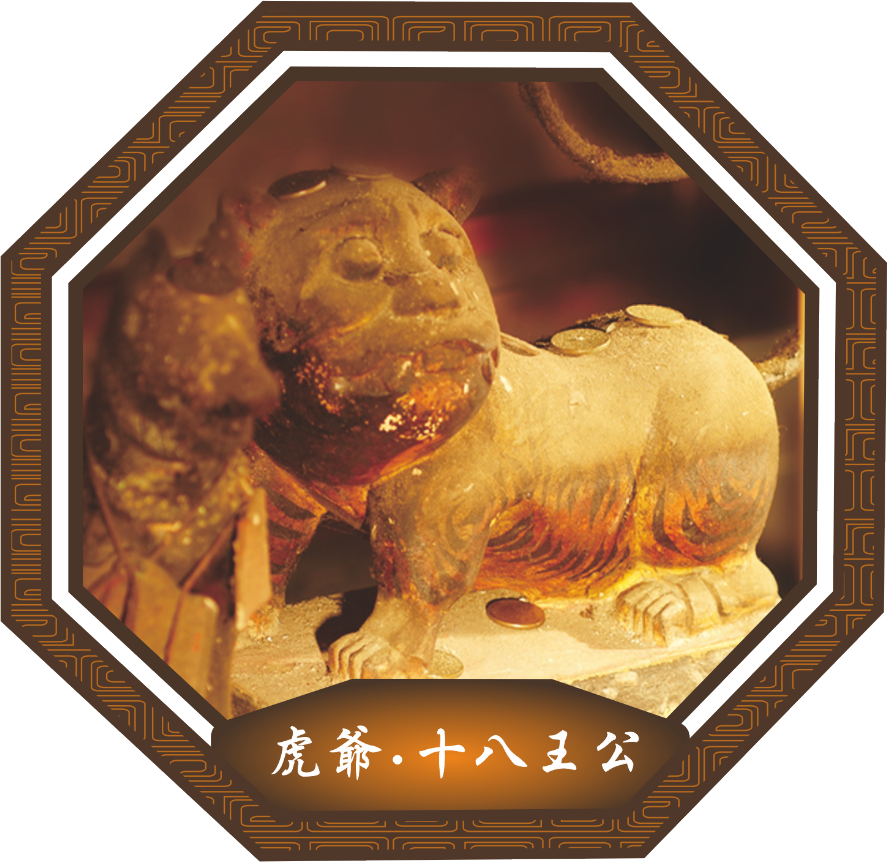 As Protector of Children

As a Deity with Curative Powers

The Tiger Lord acts as the mount of Great Emperor Baosheng (Protector of Life), the God of Physicians. Hence, people also came to believe that the Tiger Lord, having spent so much time with the God of Physicians, also became endowed with the ability to cure maladies. The Tiger Lord not only has the power to rid patients of “pig-head skin” (mumps), they can also take care of adult maladies or even afflictions of farm animals. Some believers rub the Tiger Lord’s chin with offering money and paste them on sores with the hopes that curative powers would take effect.

As a Deity and Guardian of Fortune and Money

Tiger Lord serves as the mount for the Earth Lord, Emperor Baosheng, the Western Matriarch Queen and Zhao Gongming (God of Wealth). Having followed these deities, the Tiger Lord also acquired their traits. It is commonly believed that the Earth Lord and Zhao Gongming act as the Gods of Scholarly Wealth and Martial Wealth respectively. Therefore, people also assumed the Tiger Lord to have a touch of fortune from the grace of the Gods of Wealth and would bring financial success for His worshippers. Since it is commonly held that “whoever has land will have wealth”, the Earth Lord came to be seen as a God of Wealth, overseeing lands and harvests of every region, granting Him the power to provide wealth. As a result, the Earth Lord not only governs His region, He is also the source of riches, safeguarding fortunes and granting prosperity.