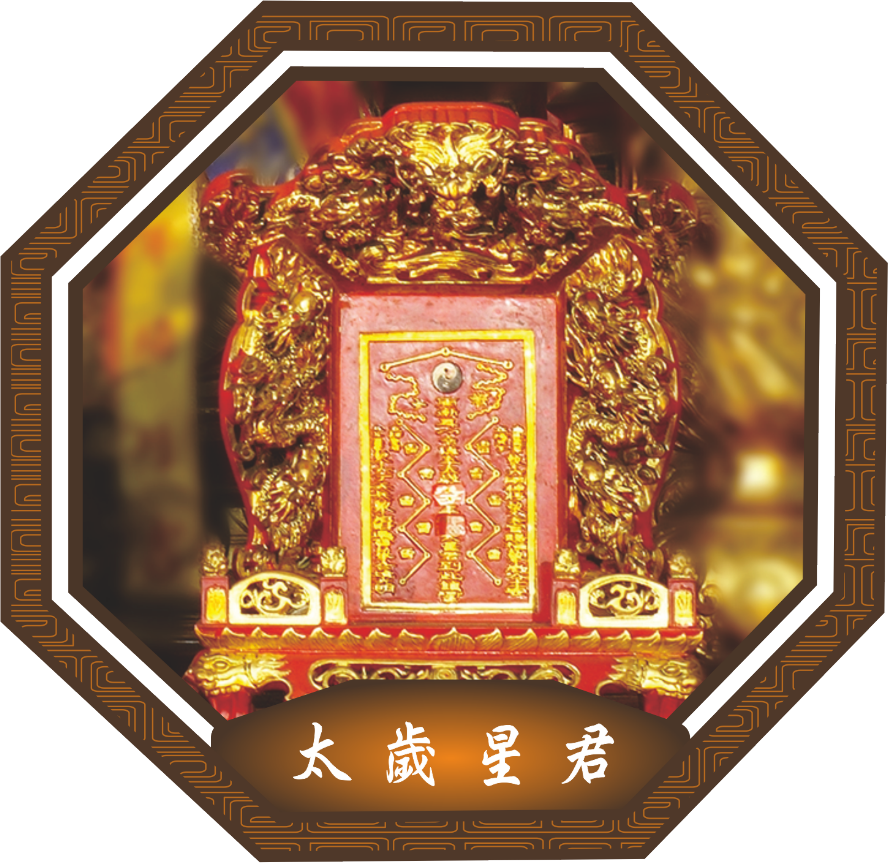 During the last year of the Shang dynasty, Jiang Ziya was tasked by the Heavens to deify the various gods at the Ascension Altar at Xiqi City. Yin Jiao, the son of the Shang Tyrant King Zhou, was given the title “Grand Marshal and General of Wuguang and Qisha of the Taisui” and preside over the Taisui (Great-Age Star) whose orbit was sixty Jiazi years. Both sharing and breaking of Taisui mentioned in common beliefs relied on the 12 year cycle of the Great-Age Star (Jupiter has an orbital period of 11.86 years). Those who share the Taisui are people who are born with the same Earthly Branch (or Chinese Zodiac Year). A person born in the Year of the Rooster would share the Taisui with another person born in the Year of the Rooster. People who break the Taisui are those birth years differ by six Earthly Branches (6 years at the least). For example a person born in the Year of the Rooster would have his/her Taisui broken by a person born in the Year of the Hare. The Yellow Emperor’s Calendar circulating amongst the common folk would usually print the name of the Taisui in the first page. Additionally, a Talisman would be also included in the inner pages for summoning the Taisui Lord for Peace in the Household. Birth years (or age) of people who must seat and appease the Taisui for that given year would also be listed, usually on the back page, front page or the inner page of the Talisman. The ages for those who share the Taisui will be 1, 13, 25, 37, 49, 61, 73, 85 and 97 years old (nominal age). And those who breaks the Taisui, which are those “whose Taisui Breaking Spirit would be at the opposite of the Taisui Lord and are likely to face calamities in the form of theft, robbery or financial loss” are those with the ages of 7, 19, 31, 43, 55, 67, 79 and 91 years old. Whether one is sharing or breaking the Taisui, this is a grave matter with misfortunes that can only be overturned by seating and appeasing the Taisui. Additionally, there are also left and right deviated breakings. Left deviated breakers of Taisui would be at 4, 16, 28, 40, 52, 64, 76, 88 and 100 years of age, while right deviated breakers would be at 10, 22, 34, 46, 58, 70, 82, and 94 years of age. These people must also seat and appease the Taisui to prevent misfortune according to the sayings of traveling priests. So what exactly is the Taisui? Strictly speaking, Sui (or Age) refers to a Star and a Deity of the Year. Numerologists of ancient China made use of Jupiter, whose orbital period was about 12 (11.86) years, as the Age-Star. The orbital period of the Age-Star was divided into 12 equally sized portions (approximately a year), with Names designating each of the 12 locations of the Star. Each Age-Star is also governed by a Deity or Taisui. Given that there are also 12 Earthly Branches, hence there will be an equal valued Earth Branch with each Taisui. In the branch year of Chou (Year of the Ox), a Taisui of the same year would be active, giving each Taisui an active period every 12 years. The 12 Taisui Lords were also regarded as bearers of misfortune. For every year, the direction of the Taisui Lord would be designated as an inauspicious one, where digging, constructing and moving should not be carried out. Some numerologists believe that Taisui Lords are Warrior Gods of Year Lord. In the years of Yin (Tiger), Mao (Rabbit) and Chen (Dragon), the Taisui stands guard at the east. In the years of Si (Snake), Wu (Horse) and Wei (Ram), the Taisui stands guard at the South. In the years of Shen (Monkey), You (Rooster) and Xu (Hound) the Taisui stands guard at the West. And in the years of Hai (Boar), Zi (Rat) and Chou (Ox), the Taisui stands guard at the North. When people wishes to construct buildings or move their houses, they must avoid the direction where the Taisui stands guard to prevent “moving Earth on Taisui’s head” and subsequent calamities. And opposite the position of the Taisui stands the Lord Posui (Star-breaker) who invites financial ruin and theft. Hence, people will avoid that position as well.

Each year has a different reigning Taisui, the names are given beow: